One of the remnants of the great lost estates of the United Kingdom, Cassiobury Park is now the largest park in Hertfordshire, and the principal park of its primary town, Watford covering an area twice the size of Hyde Park in London. But this is no ordinary town park nor is it a park that stems from the Victorian age. It is the remnant of the once great Cassiobury House and the estate of the Earls of Essex. By the beginning of the twentieth century, the decline of the Cassiobury estate was obvious with large areas of the park sold off in 1909 and 1912 to Watford Borough Council for public parkland despite the opposition of local people. By 1921 the lease on the house was surrendered and in 1927, the magnificent gothic mansion of Cassiobury House was demolished. Much of the remaining land was bought by the Council and became further parkland. Despite the localised resistance to the acquisition of the new park, it soon became extremely popular with new facilities introduced. Central to the new park was the introduction of a significant bandstand within an enclosure. Tenders were being invited in September 1911 ‘for a bandstand to be erected in Cassiobury Park’.

A number of tenders were received including one from McDowall Steven and Co. for a No.5 bandstand. However it was a tender from Messrs. Ensor and Ward that was accepted for the erection of a Hill & Smith bandstand in October 1911. The West Herts Post on 20 September 1912 reported ‘Cassiobury Park Bandstand – this structure now appears to be shaping up under the supervision of Messrs. Ensor and Ward, builders and contractors, Watford who have got the work in hand [and] will shortly complete the whole structure. It is to be hoped the fine weather will prevail... The opening of the new addition to the Park takes place on Wednesday afternoon at 4.30pm when the Artizan Staff Band will render a nice selection of music’. It was formally opened on the 27 September 1912. Screens were later added in 1914 and proposals to extend the bandstand area between 1920 and 1923. Immensely popular, The West Herts and Watford Observer reported on 15 September 1923, ‘The season’s band performances in Cassiobury Park concluded on Sunday with two programmes by the combined bands of the Coldstream Guards and the Welsh Guards. In the afternoon the enclosure was full, but at the evening performance the accommodation was taxed to overflowing, and thousands congregated around the bandstand’. In 1930, sales brochures for local estate developments describe Cassiobury Park’s natural amenities ‘with a band enclosure with seating for 1,500 people. First class military bands give performances every Sunday’.

By the 1970s the bandstand was a shadow of its former self and in 1975 was in pieces in the Council depot but with a decision to re-erect it but even this caused consternation locally with one councillor complaining about its proposed new position next to the library, ‘I never thought this was a suitable place for a bandstand but having got a stupid concrete base we have got to do something with it’. It was subsequently reassembled but was never intended ‘to be used by a band or for musical entertainment’ but as ‘an architectural feature’. Its condition was poor, missing its soundboard and had an appalling felt roof.

But now...... IT IS BACK in its rightful place and back in Cassiobury Park and is to be re-opened on Sunday 4th September, carefully restored by Lost Art of Wigan. The colours are reflective of the Capel family tree and now sits resplendent back exactly where it used to be. 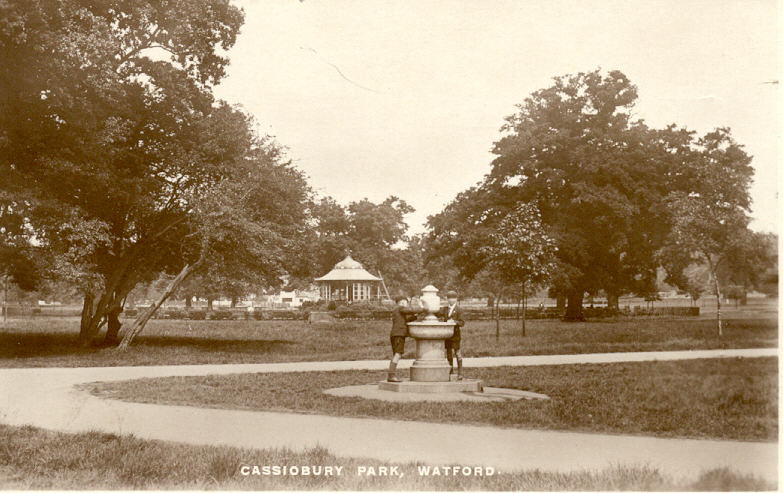 The bandstand in the park - early days 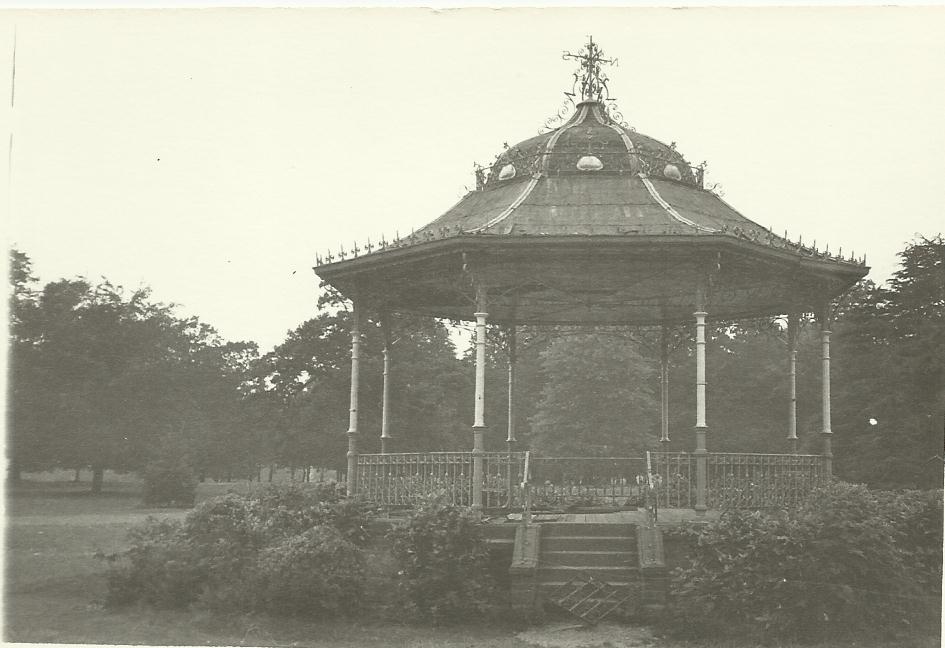 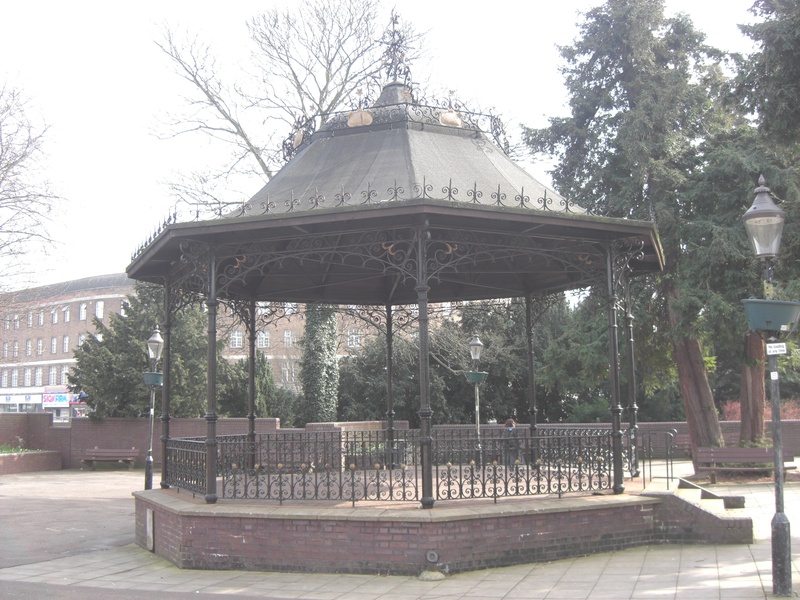 In the town centre - looking poor and forlorn 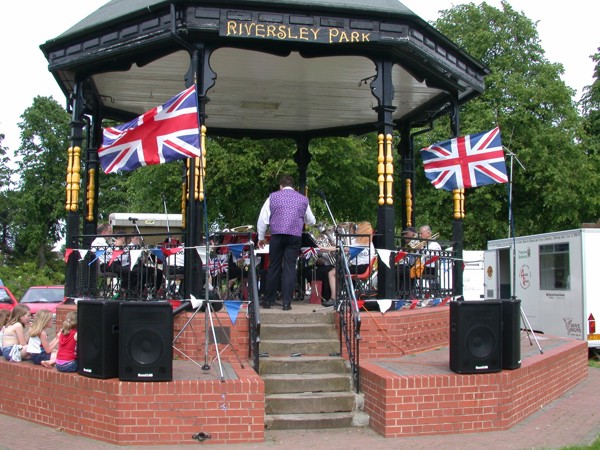 Time to go back to the park? 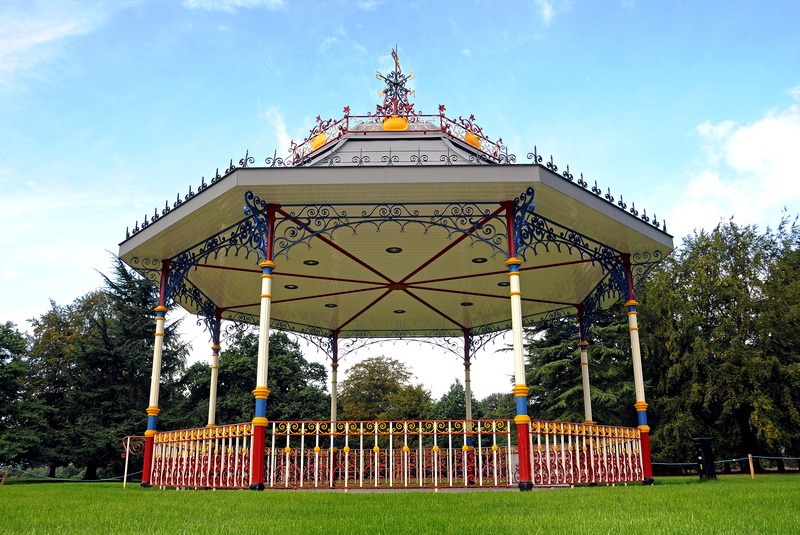